DOLE® Soft Serve is delighted to bring our readers a guest article written by Daniel Butcher originally printed in Celebrations Magazine in 2011. Celebrations Magazine revisited the article before giving us permission to release on our blog. Note: Precision Foods referenced in Butcher’s article is now Kent Precision Foods Group www.precisionfoods.com  and the new marketing manager for DOLE Soft Serve is Jamie Schwartz. 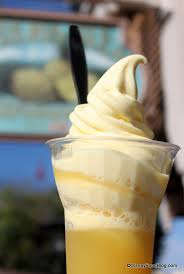 A group of intrepid explorers have trudged across the bridge into an exotic and lush land. Around them they can hear the beat of the drums that scream adventure. The large and rare disneyodendron eximus tree, once home to a well-known Swiss family, is in sight, flying carpets are around the corner, and pirates are rumored to be up ahead.

The prospect of adventure is tantalizing, but the heat is unbearable. Only the prize marked on their map will cool them and quench their thirst, so they set off in search of their quest. Finally, the adventurers have arrived at Aloha Isle, home to the infamous Dole Whip. Thankful for this refreshing oasis in the midst of the jungle darkness, the explorers reward themselves with a treasured treat that has become the stuff of legend.

The story of Dole Whip begins with the history of the Dole Food Company, Inc. The roots of this well known fruit and vegetable corporation go back to 1851 with the founding of Castle & Cooke by Samuel Northup Castle and Amos Starr Cooke, who were missionaries to Hawaii. Castle & Cooke started as a general goods store selling items ranging from farm equipment to medicine. The partnership was highly successful and they reinvested their profits into Hawaiian industries, such as sugar. In 1931, Castle & Cooke bought an interest in the Hawaiian Pineapple Company which had been formed by James Drummond Dole in 1901. Dole was a Harvard educated businessman who changed the paradigm for pineapple sales. Instead of selling fresh pineapples, Dole built a cannery and canned his product for sale. Dole’s endeavor was a success and outgrew established markets in Hawaii and California. With Dole pineapple packaging production increasing due to automation, Dole began selling the exotic treat of pineapple to the mainland. The campaign was a success, with Americans wanting to add something different to their dinner tables. The popularity of pineapple with American consumers is often credited to Dole’s efforts. By 1918, Dole was packaging one million cases of packed pineapple, and the Hawaiian Pineapple Company continued to expand under Dole’s leadership. But the Great Depression led to a decline in pineapple sales, and Castle & Cooke gained majority control of the Hawaiian Pineapple Company in 1932. Soon after, they began to use the Dole name on the Hawaiian Pineapple Company’s pineapple products.

On May 20, 1958, the retired James Dole passed away after suffering a heart attack. In 1961, Castle & Cooke purchased the remainder of the Hawaiian Pineapple Company and the Standard Fruit Company that imported bananas. From the creation of a local general store and James Dole’s dream of a pineapple plantation, a multi-billion dollar corporation was born.

A New Treat Comes to Disneyland 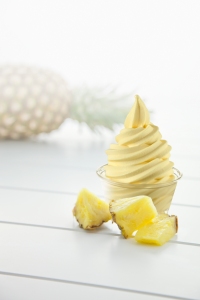 DOLE Pineapple Soft Serve is used in the DOLE Whip

When Walt Disney’s Enchanted Tiki Room in Disneyland opened on June 23, 1963, the attraction was sponsored by United Airlines. In 1976, the Dole Food Company replaced United Airlines as the corporate sponsor of the attraction, beginning a highly successful relationship between the Dole Food Company and the Walt Disney Company. In the 1980s, Dole sought a new product that they would offer in Disney parks. The result was a soft serve treat alled Dole Whip. The Dole Food Company originally manufactured the dry powder mix used in soft serve machines to make Dole Whip. However, in time they contracted with Precision Foods Inc, a food manufacturing company founded in 1992 that specializes in dry mix products, to exclusively prepare the Dole Whip mix. The ingredients of Dole Whip, and its distinctive pineapple flavor, are combined at the Precision Foods’ plant in New Sharon, Iowa. Precision Foods offer seven flavors of Dole soft serve mix including pineapple, orange, strawberry, raspberry, mango, vanilla and chocolate.

Within the Walt Disney World Resort there are two locations where Dole Whip can be found. First, and the most popular, is Aloha Isle in the Magic Kingdom’s Adventureland. At this location, Pineapple Dole Whip soft serve is available in a cup or as part of a pineapple float, a combination of Dole Whip and pineapple juice. Besides pineapple, Guests can also purchase vanilla and orange soft serve which can be swirled to make a delicious combination of flavors. A cup of Dole Whip and a Pineapple Float each cost under $5, making them affordable (and popular!) treats. The pineapple float can also be made with either orange or vanilla soft serve. As one enjoys their Dole Whip in the middle of the sights and sounds of Adventureland, one cannot help but feel like they are in the midst of a tropical adventure.

But Aloha Isle isn’t the only place you can find this coveted treat. The second location, less familiar to Guests, is Captain Cook’s Snack Company at the Polynesian Resort. Here Guests can fill their own cups with delicious pineapple Dole Whip or swirl pineapple with vanilla at the self serve machine. As an additional bonus to Guests, Dole Whip and Pineapple Floats are snack options for those using the Disney Dining Plan.

Dole Whip Beyond the Parks

There are a variety of locations beyond the parks where Dole Whip aficionados can find their favorite treat. Some adventurous souls have even attempted to duplicate the exotic concoction in their home kitchens.

You might expect to find the Dole Whip somewhere in Hawaii, and you would be right! While the Walt Disney World and Disneyland resorts are the two primary distributors of Dole Whip, a third is the Dole Plantation three miles north of Wahiawa, Hawaii. The Dole Plantation started in 1950 as a fruit stand in the original Dole pineapple plantation. It has since grown to become a major Hawaiian tourist attraction as well as a tribute to the legacy of James Dole and his role on the pineapple industry. Attractions on the plantation include the Pineapple Express Train Tour, a 20-minute tour of the plantation that educates guests on the history of the pineapple. Additionally, guests can tour the plantation garden filled with native plant species, while the more adventurous can explore the 2.5 miles of paths in the World’s Largest Maze. More importantly (for our purposes), you’ll find the Country Store where you can find the “world famous” Dole Whip. And unlike a Disney park, you may find some two-for-one coupons for twice the treat!

According to Lynette Oliver-Roeder, Frozen Dessert Manager for Precision Foods Inc., the Disney experience helps spread the distribution of Dole Whip beyond the parks. A common story for Precision Foods Inc. sales representatives is when an independent restaurant owner will stumble upon Dole Whip, either at Walt Disney World or Disneyland, and fall in love with the refreshing and unique pineapple taste. They will then contact Precision Foods Inc. to find out how they can sell Dole Whip in their own establishment. As long as they have access to a soft serve machine, they are able to purchase the Dole Whip mix and help bring part of the their Disney experience to their own customers and guests. With that being the case, you never know where you might find a Dole Whip. It could pop up anywhere, from the Minnesota State Fair, Luther College in Decorah, Iowa, or self serve yogurt shops across the United States.

Can’t wait for your next Disney trip or Dole Whip discovery to enjoy that scrumptious treat? Well, never fear; you can purchase the Dole Whip mix online, and a search of the internet will turn up videos that demonstrate how the mix can be used at home. However, Oliver-Roeder notes that Precision Foods, Inc. does not endorse the mix for home kitchens. The mix was designed for commercial soft serve machines and they cannot guarantee the consistency of Dole Whip prepared through other methods. Fans have also attempted to clone Dole Whip using other ingredients at home. A search of the internet will uncover numerous at-home pineapple Dole Whip clone recipes. Some recipes rely on pineapple juice, while others use canned pineapple to give the final product its pineapple flavor.

Regardless of the recipe or one’s kitchen equipment, be aware that without a soft serve machine at home, recipes cannot capture the texture of Dole Whip even if one reproduces the pineapple flavor. Simply put, one can never truly reproduce the sight, sounds, and texture of Dole Whip at home. Dole Whip truly is the snack of the adventurous.

The Dole Whip will remain a favorite Walt Disney World Resort snack for years to come. Originally crafted for Disneyland, it has created a cult following amongst its fans. And for those fans, the discovery of unexpected Dole Whip or the attempt to duplicate the snack at home is one way to bring one closer to vacation memories.

For all of us who love Dole Whip, we wish all,:

For you every day I wish

In a float or in a cup

I can’t wait to eat you up!

Article written by Daniel Butcher, husband and father of two in a family of Disney enthusiasts.Daniel has degrees in history from Iowa State University. He blogs about living between Disney experiences at http://betweendisney.blogspot.com and discusses Disney’s Marvel Cinematic Universe at www.welcometolevelseven.com.